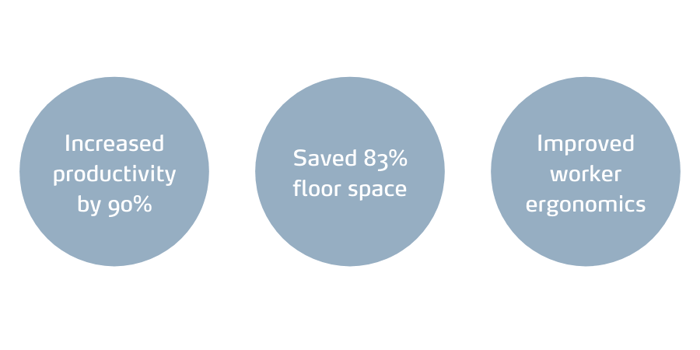 “Our parts promise to our customers presents an operational challenge as we have to inventory parts that are only picked once a year. To meet our parts guarantee we must be able to find it,” says Doug Ward, Logistics Manager, “and the system we had in place made that difficult.”

In the second phase, Kubota added another work zone using four Kardex Shuttles. “We were out of space and were considering an expansion,” says Ward, “The Kardex Shuttles allowed us to free up floorspace and avoid a costly building expansion.”

Productivity Increases
In the mezzanine zone workers were picking an average of 20 lines per hour. “We couldn’t throw any more bodies into the mezzanine zone without people tripping over each other. With parts sales growing we needed to pick faster,” said Ward. Now, one person working in the horizontal carousel zone picks an average of 225 lines per hour while bagging and tagging. “We were able to increase our picking productivity by over 90% and only need one worker to manage the carousel zone,” said Ward.

Do you have a project you’d like us to spec & quote?